The Life of Horace Stoneham 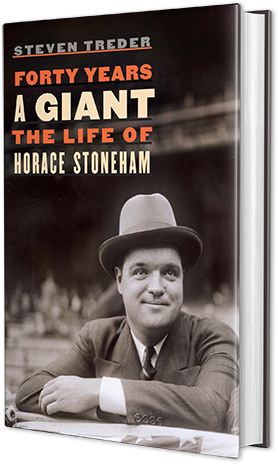 This is the biography of Horace C. Stoneham, who inherited ownership of the New York Giants in 1936, and remained owner of the franchise until 1976.  His ownership tenure was one of the very longest in the history of major league baseball.  Through those many decades, Stoneham built the team’s farm system into perhaps the most productive in the sport’s history.  He racially and culturally integrated the organization to an extent unsurpassed at the time, and he also relocated the franchise across the continent, introducing (alongside Walter O’Malley’s Dodgers) major league baseball to the West coast.

Horace Stoneham wasn’t just the owner of the Giants; for nearly all of his tenure he served as his own General Manager.  He built, and rebuilt, his teams using his own judgment and decision-making.  Many of the sport’s most celebrated characters were his employees, including Hall of Famers Bill Terry, Carl Hubbell, Mel Ott, Johnny Mize, Leo Durocher, Monte Irvin, Willie Mays, Orlando Cepeda, Willie McCovey, Juan Marichal, and Gaylord Perry.  Stoneham’s experience within baseball, and his impact upon it, was epic – yet until now, his biography had never been written.

You probably don’t know much about Horace Stoneham.  You should.  His is a rich story about the competition of baseball as a sport, and also about the often-difficult business of it.  It’s a story about the culture, economics, and racial dynamics of the United States through the mid-20th century, and a story about the developing cities of New York and San Francisco.  Stoneham achieved much great success, and also suffered much frustration and disappointment, both within and beyond the realm of baseball.

This book is the product of years of extensive research, and bears the benefit of intimate insights from Stoneham’s granddaughters into his personal bearing and character.  The story begins with his father, Charles A. Stoneham, a wild and notorious New Yorker, a self-made millionaire with highly questionable ethics, whose manic personality and behavior were very different from his son’s.  The story includes John J. McGraw, whose genius built the New York Giants into the premier brand in professional sports.  It also involves many other colorful parties such as Branch Rickey, Toots Shor, Larry MacPhail, Russ Hodges, Bill Veeck, Lefty O’Doul, Danny Kaye, Charlie Finley, and Sam McDowell.

Forty Years a Giant is a major new contribution to the literature of baseball history.  It combines the fun and excitement of many dramatic games – yes, Bobby Thomson is here, and Vic Wertz and Bobby Richardson and John Roseboro – with the extraordinary growth and development of professional baseball as a business, intertwined with the extraordinary growth and development of the radio and television businesses.  It’s also the difficult and inspiring story of racial and cultural bigotry and understanding.  It’s the story of the many amazing things that one man saw and did, and of the many remarkable lives that one man touched. 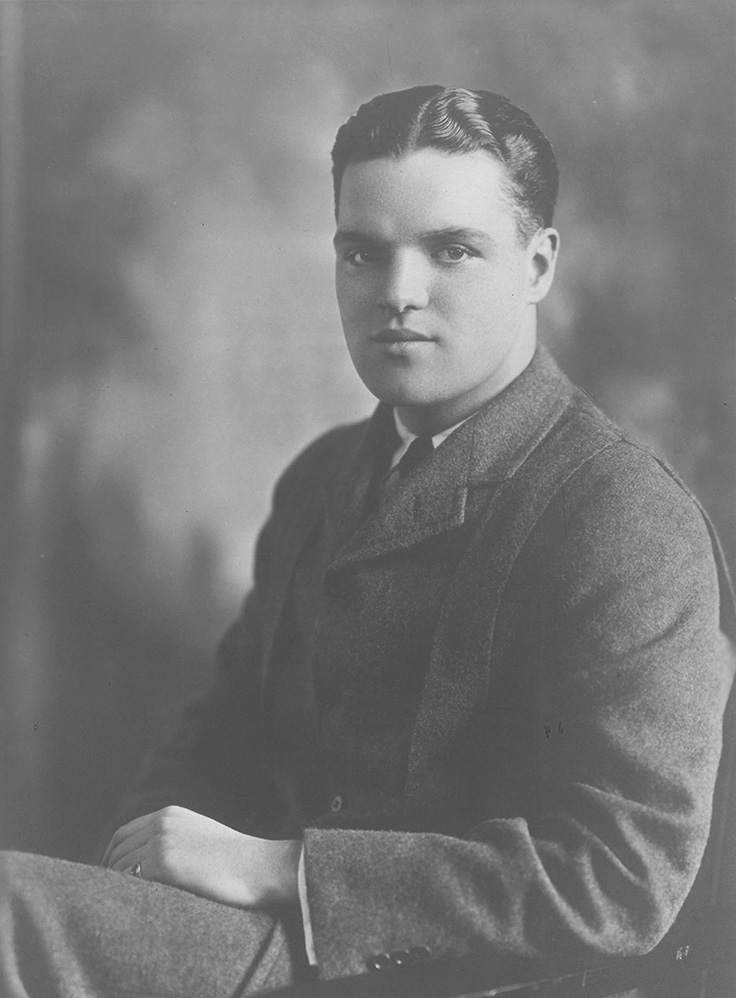 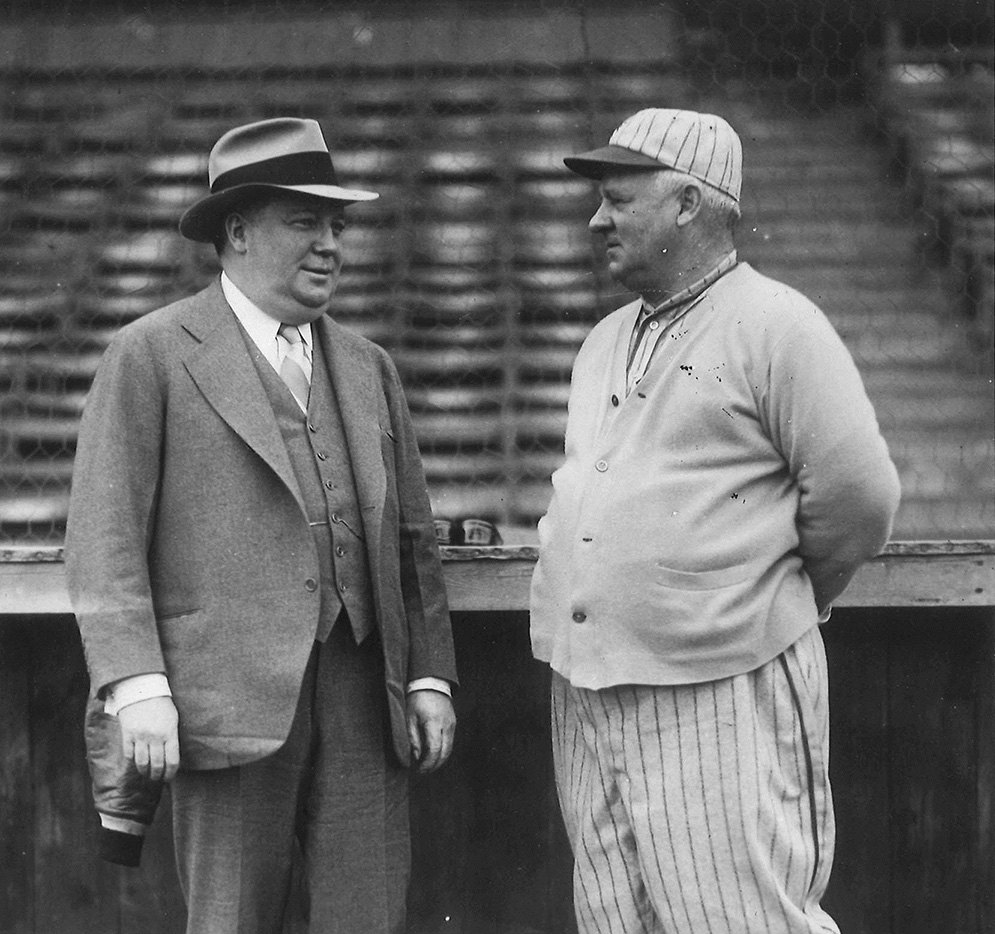 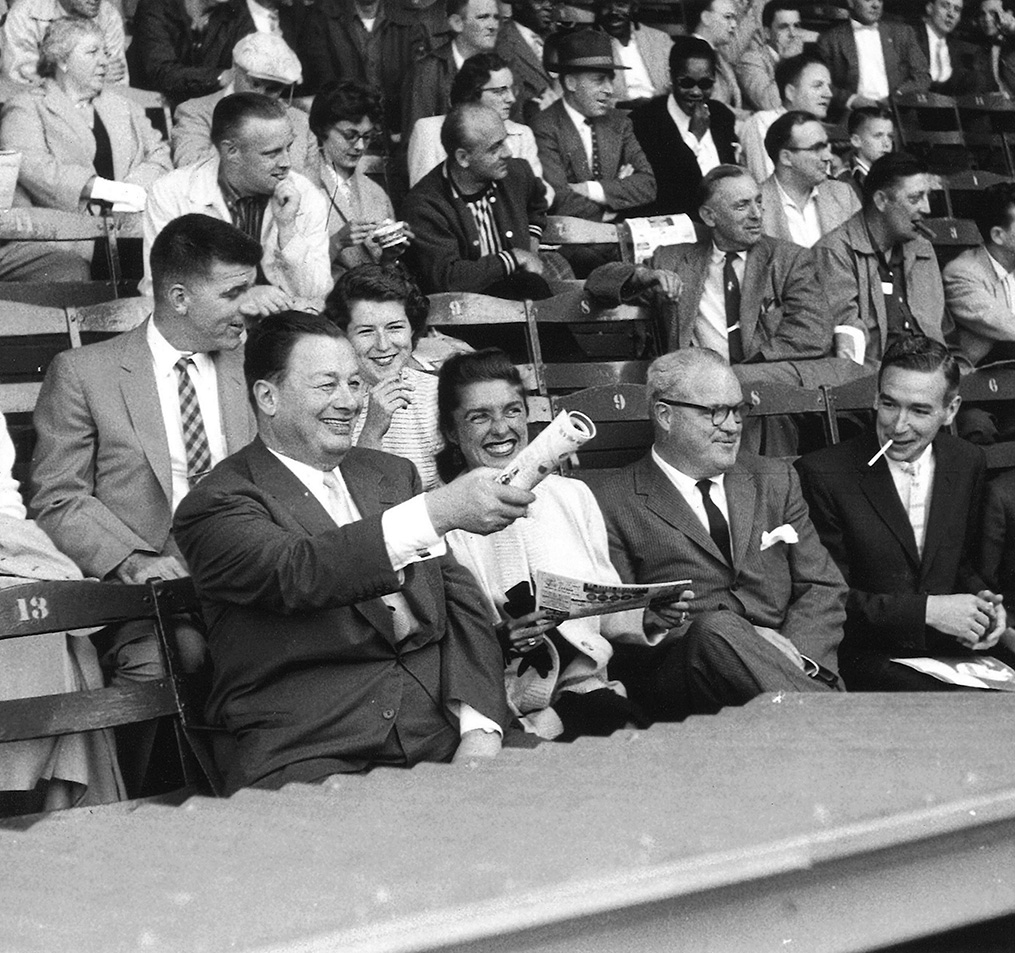 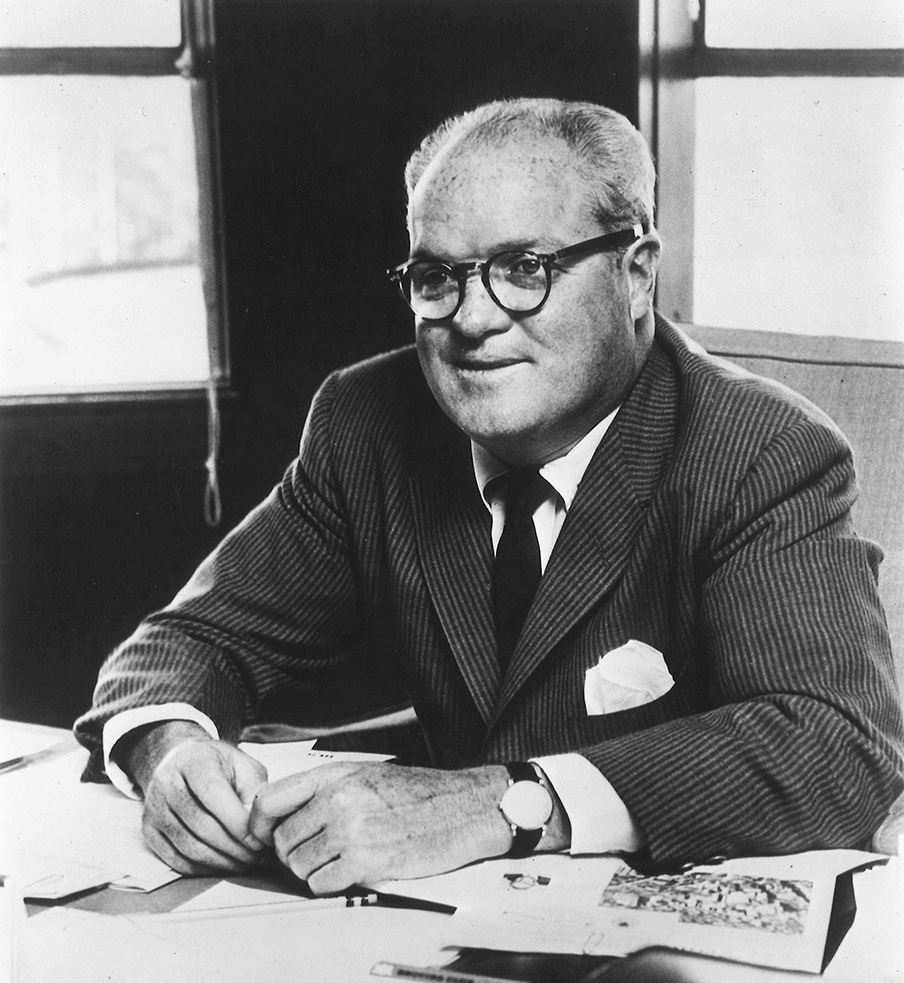 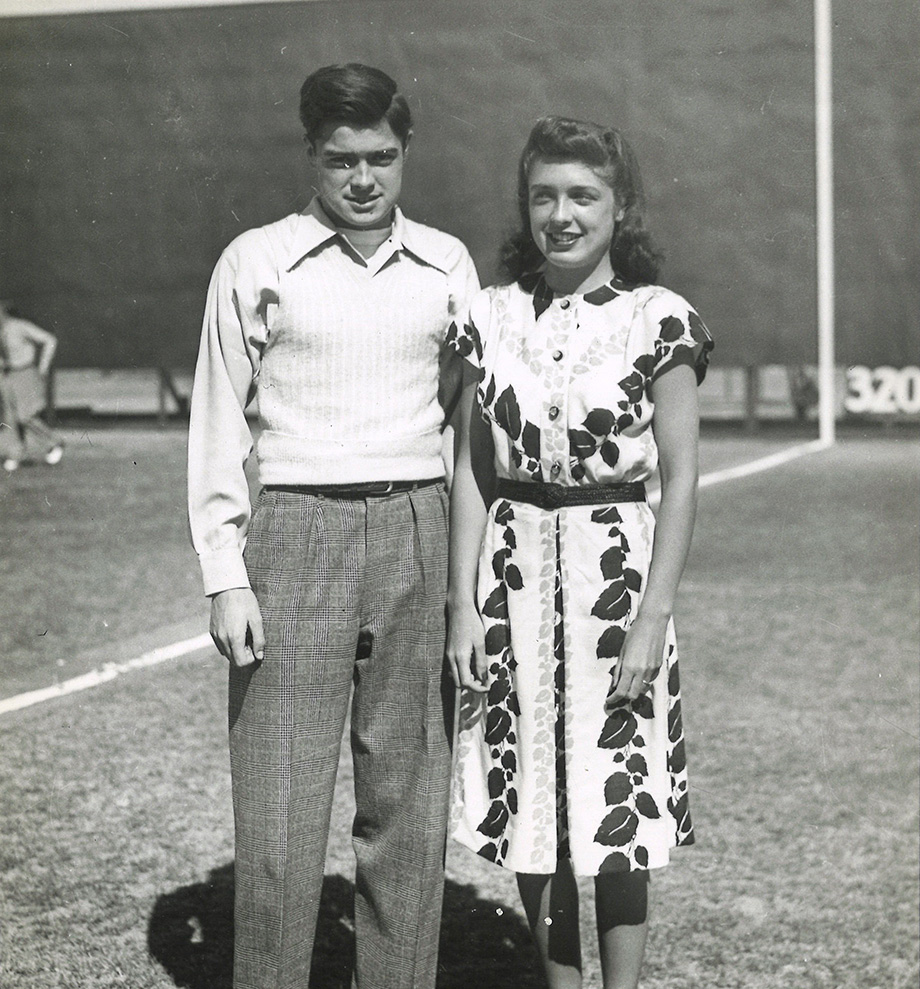 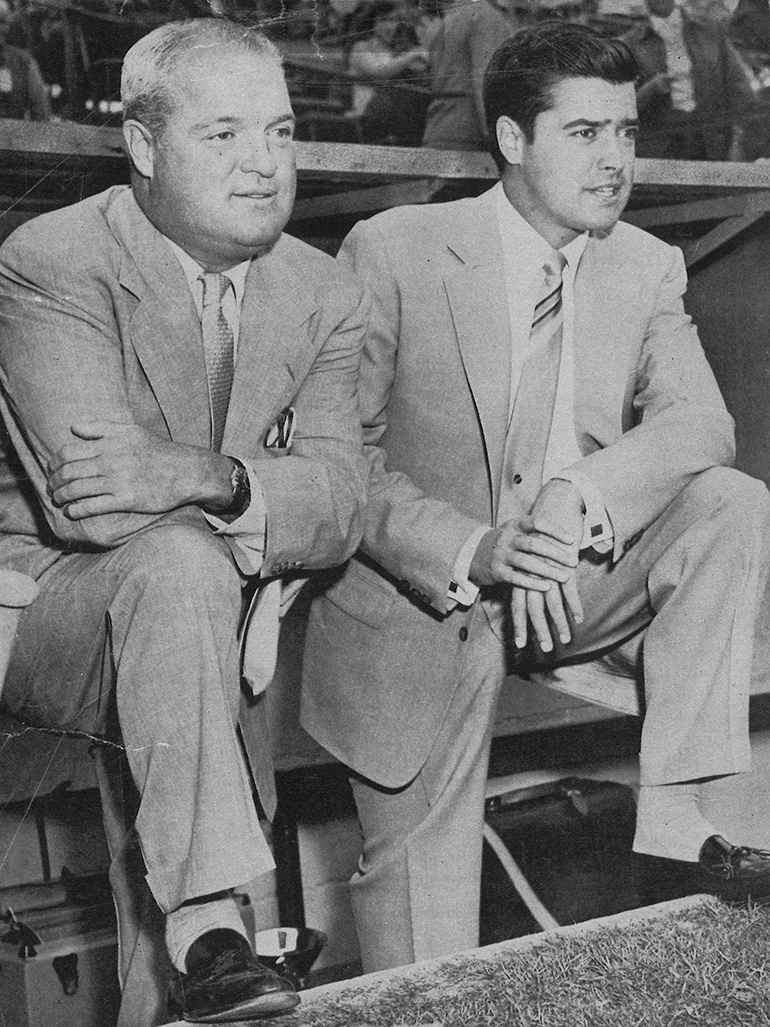 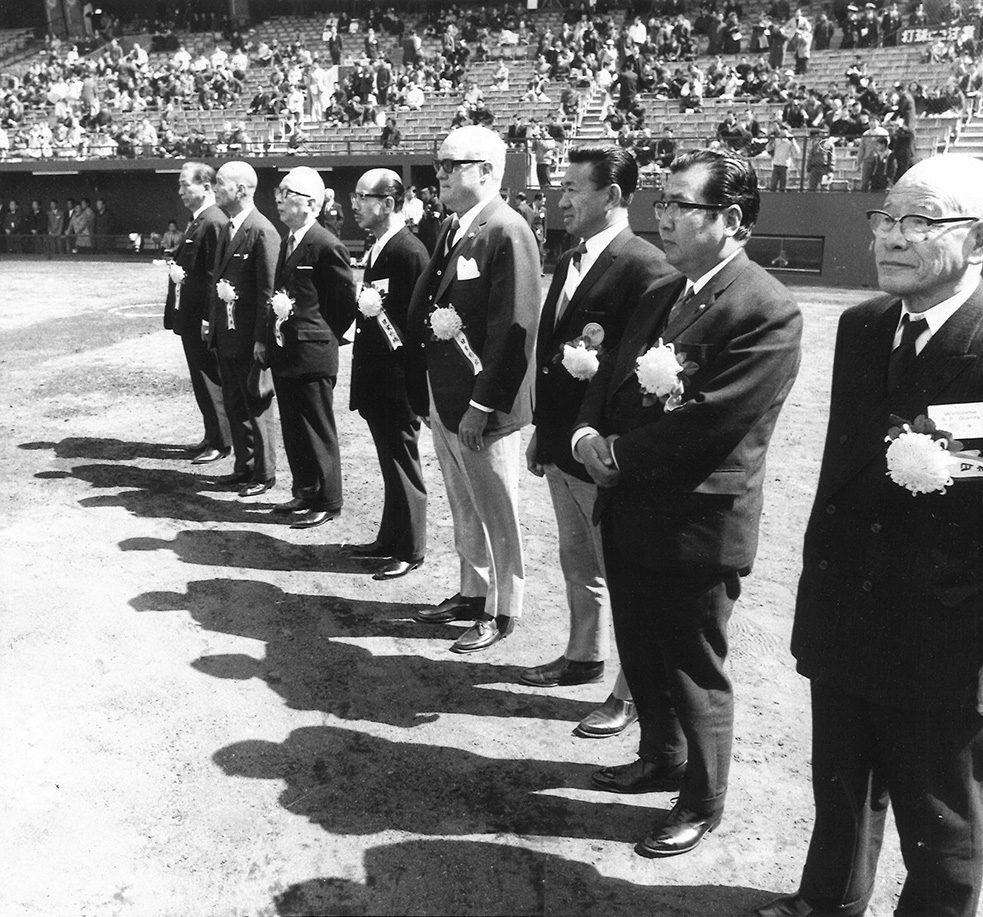 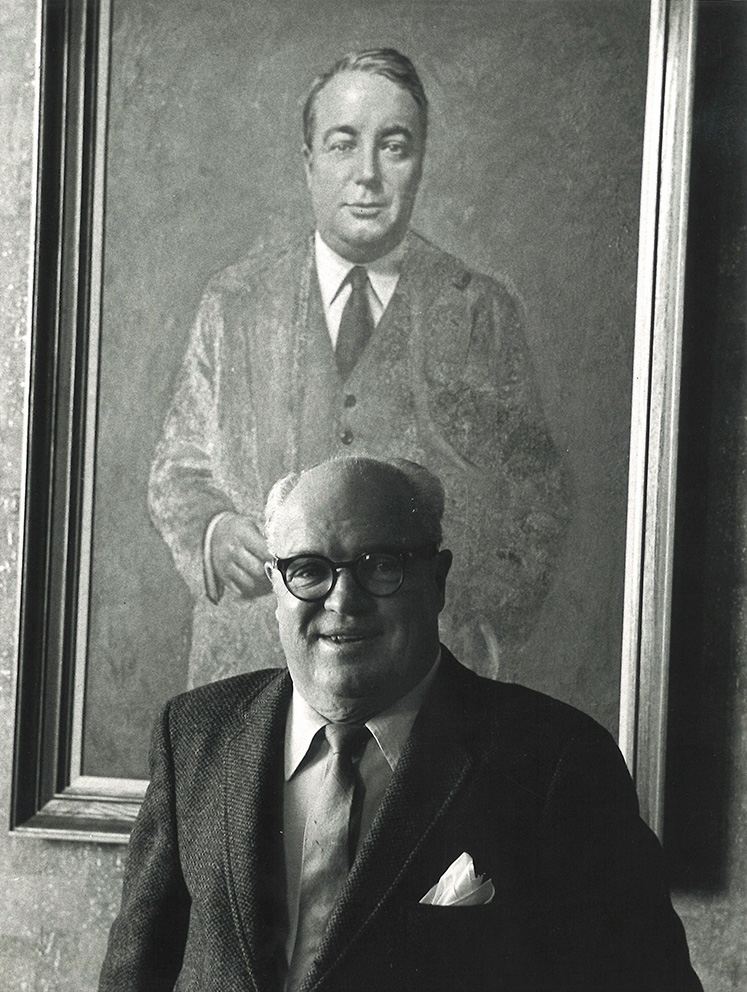 “No one better understands the Giants of the mid-20th century than Steve Treder, so I knew this was a perfect pairing of author and subject. I was not disappointed -- this is an absorbing look at one of baseball's most fascinating teams.”

author of Joe Cronin: A Life in Baseball

“Steve Treder’s masterful Forty Years a Giant: The Life of Horace Stoneham tells the story of an oft-overlooked but nevertheless central figure in the history of baseball in New York City, San Francisco, and in the wider Major League game. Exhaustively researched and compulsively readable, this work positions Stoneham in the center of baseball’s changing landscape and in the changing landscape of America. As much a history of the Giants as a biography of the team’s long-time owner, this richly contextualized book rescues Stoneham from the sidelines of New York City’s baseball world and places him alongside Walter O’Malley in the story of sport’s success in California, where he belongs. It is a delight.”

author of Here’s the Pitch: The Amazing, True, New, and Improved Story of Baseball and Advertising

“History has not been kind to Horace Stoneham, a true baseball pioneer who helped integrate the game back in the late 1940s and was part of baseball’s westward expansion in the late 1950s. Despite all his achievements, Stoneham has been relegated largely to the shadows of baseball’s story. Steve Treder’s new book will change that view, shedding considerable light on one of baseball’s most enigmatic characters. Treder makes the case for Stoneham as a baseball lifer, a man connected with the Giants as a family business, who inherited the team from his father and whose singular focus was the game of baseball. Treder shows Stoneham’s leadership qualities, not only in the recruiting and signing of African-American and Latino players and the historic move out of New York to California, but also in the day-to-day running for almost forty years of an important baseball franchise. Giants fans especially will enjoy both Treder’s thorough narrative of the Stoneham years both in New York and in San Francisco—the players, the games, the seasons—and his extensive and balanced portrait of the man most responsible for that history.”

author of Home Team: The Turbulent History of the San Francisco Giants

“Horace Stoneham may be one of the most underappreciated baseball executives of the twentieth century. Thanks to Steve Treder we now have a book that recognizes his significance and reflects the Giants’ prominence in many of the fascinating and consequential moments of more than five decades of baseball history.”

author of Ed Barrow: The Bulldog Who Built the Yankees’ First Dynasty

“Sometimes you just don't know what you were missing until you've got it. More than players, more than coaches, more than anyone else really, it's always been the owners who determine the fates of baseball franchises. Which makes it all the more surprising that Steve Treder's outstanding book is the first comprehensive biography of Horace Stoneham, who owned one of baseball's titanic teams through forty years of revolutionary change.”

“A reader may not always agree with the conclusion or speculation provided by the author, but it doesn't diminish the work done to make this book an enjoyable read. Fans of the Giants will especially be interested in this historical book on the team as well as those who enjoy reading baseball history books.”

writer at The Guy Who Reviews Sports Books 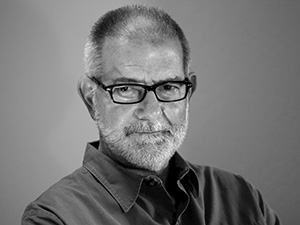 Steven Treder has lived his entire life in and around Santa Clara, California.  He was born into a family of devoted San Francisco Giants fans, and from earliest childhood was steeped in a soundscape of Giants’ games on radio station KSFO, in the voices of Russ Hodges and Lon Simmons.  He attended his first major league games at Candlestick Park in 1966.  A portrait of Willie Mays hangs on his office wall.

Treder’s proudest achievement in life came early:  he was batboy for the Santa Clara University baseball team.  He went on to receive a bachelor’s degree from Santa Clara, and a master’s from Stanford University, both in the field of Sociology.  He has enjoyed a 40-year career in Silicon Valley, including decades as a management consultant.

Beyond his enduring fandom for the Giants, Treder has long been a noted baseball researcher and historian.  Since the 1980s he has been a frequent presenter at Society for American Baseball Research meetings and other baseball scholarship conferences, and the author of numerous articles in various baseball publications.  From 2004 to 2013, Treder contributed a weekly column on baseball history to The Hardball Times website.

Treder continues to enjoy life in Santa Clara with his wife, tending to his flower and vegetable gardens and pining for the next visits with the grandkids.

Interviews With the Author

Meet Steven Treder at his official Book Launch event hosted at Sausalito Books by the Bay on Sunday, September 30th:

Listen to Steven's interview on the Good Seats Still Available podcast, in which he discusses the life and legacy of Horace Stoneham as well as his work in researching and writing the book:

Also, his interview on the Lovin' Baseball When We Were 12 and Innocent podcast with Ralph Tyko:

Watch Steven on the joint meeting of the San Francisco Bay Area and Sacramento Area chapters of the Society for American Baseball Research: